A full fifteen months out from the 2012 election we are starting to see a bit of hand-wringing among Democrats and signs of optimism among Republicans, largely on the basis of President Obama's tepid approval numbers and the downward stickiness of the unemployment rate.  In the spirit of "Don't Get your Pants in a Twist" (Democrats) and "Don't Count Your Chickens" (Republicans),  I'd like to say a bit about what current conditions might tell us about the the 2012 presidential election.

I suppose it is understandable to focus on Obama's approval rating, though I think it is silly to put too much stock in it this far before the election.  Also, given its prevalence in the media, I suppose it is not surprising that some have focused on the unemployment rate, both nationwide and in key states.  To say this is not surprising, however, is not the same thing as saying it is a good idea.  In fact, academic election forecasters pay relatively little attention to the unemployment rate when predicting election outcomes, generally focusing on broader indicators, such as change in GDP or change in per capita income.  But, more importantly, it is just not a good idea to read too much into any current conditions (whether unemployment, presidential approval, or anything else) this far ahead of the election.  As Seth Masket points out, Obama is much more likely to be held accountable for economic conditions a few months prior to the election than for those we are currently experiencing.

Just how well can you predict election outcomes this far (fifteen months) ahead of time?  Let's look at some data.  First, consider the relationship between presidential election outcomes from 1948 to 2008 and the unemployment rate in July of the year before the election.  I think the bottom line from this figure should be loud and clear: DON'T EVEN TRY TO PREDICT THE 2012 ELECTION WITH CURRENT (July, 2011) UNEMPLOYMENT DATA!  (Sorry for shouting). There is hardly any relationship (r-squared=.07), and slight pattern that does exist is nonsensical, indicating that Obama's best strategy would be to increase unemployment as much as possible. 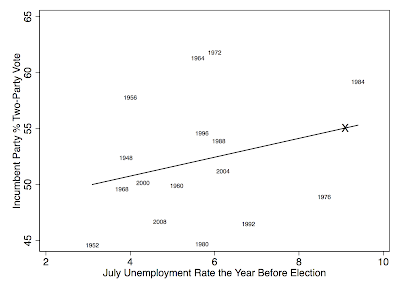 In fact, looking at the individual observations, it is hard not to notice that the only president with a higher unemployment rate fifteen months prior to the election was Ronald Reagan, who went on to win the 1984 election in a landslide.  By the way, the X on the prediction line represents the current (July) unemployment rate, 9.1%.

Okay, so predicting with unemployment this far out is a risky enterprise. But what about presidential approval? Surely, Obama's lackluster approval numbers must presage something about his prospects next year. Right?  Well, actually, not so much.

The data below show that while summer (averaged June, July, and August) approval (Gallup) in the year before the election is a better predictor of election outcomes than the unemployment rate is, I wouldn't bet the farm on any such predictions.  Here we at least have a relationship that makes sense: presidents with high approval numbers in the summer of the year before the election generally do better (or their party does better) than than those with relative low levels of approval.  Having said that, the relationship is not very strong (r-squared=.20), and there are certainly a number of exceptions to the general pattern.  Once again, X marks the spot (Obama's summer average, 45.2%). 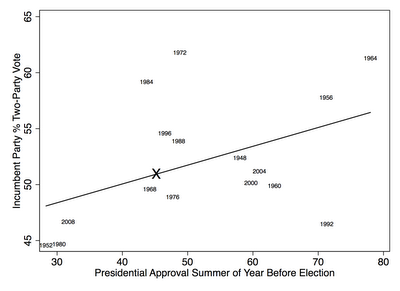 Just to reinforce the silliness of trying to predict from these data, it is noteworthy that Obama's average approval rating thus far in the summer of 2011 (45.2%) is close to those of Johnson (1967), Ford (1975), Clinton (1995), Reagan, (1983), and Nixon (1971); and this group of elections turned out to be either narrow losses or substantial victories for the incumbent party.

Look, it's perfectly natural to gnash your teeth or get all giddy about your party's prospects based on how things are going now.  I certainly do that.  The point is that you should spare yourself the emotional energy and wait until we get closer to the election.  Then, you can start to worry (or celebrate), depending on how things are going.

Notes: I could not find July 1947 unemployment data, so I used the unemployment rate for the entire year.  Also, the summer 1963 approval rate is for President Kennedy, not President Johnson.  If the 1964 election is dropped from the analysis the approval relationship becomes somewhat weaker.
Posted by Tom Holbrook at 4:18 PM